Stays and the chemise gown

One of the things that was so scandalous about the chemise gown when it first debuted was that it required shockingly little in the way of underwear. Descriptions of lightly boned stays and pink or blue silk petticoats are plentiful in relation to the chemise gown. Comparing these light weight undergarments to the more sturdy and stiffly structured stays, bumrolls, panniers, and petticoats of the period, it must have seemed as though women were running around half naked when they adopted the fashion of the chemise a la reine.

But what did these scanty undies actually look like? As luck would have it, the Manchester Gallery has two pairs of stays that are contemporary to the chemise gown, and I was able to study them closely. 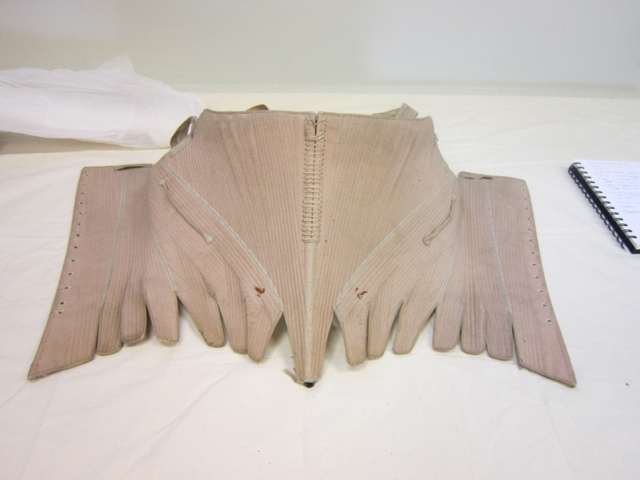 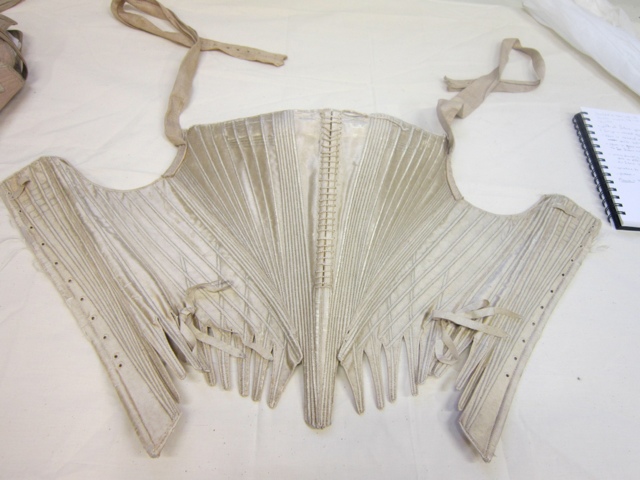 Both stays belong to the same acquisition lot, and are similar enough in size and construction to indicate that they probably were worm by the same woman. The top photo shows the more heavily boned of the pair. It is made from a pale pink linen, and is very stiff. A few stitches had popped on the lining, allowing me to see that the stiff material was likely a coarse woven linen buckram. Just thinking about hand stitching all those boning channels through that stuff made me want to lay down.

The stays in the second photo are less rigid, having about half the overall boning in them as the pink pair. The outer fabric is a cream silk satin, and it does not appear that the same kind of stiff buckram was used in this pair, as was in the pink stays. Both stays, however, have the same partial lacing down the center front (functional), a thick band of baleen that shaped the front of the stays into a pronounced curve, and a sturdy baleen strip acting like a busk down the center front. 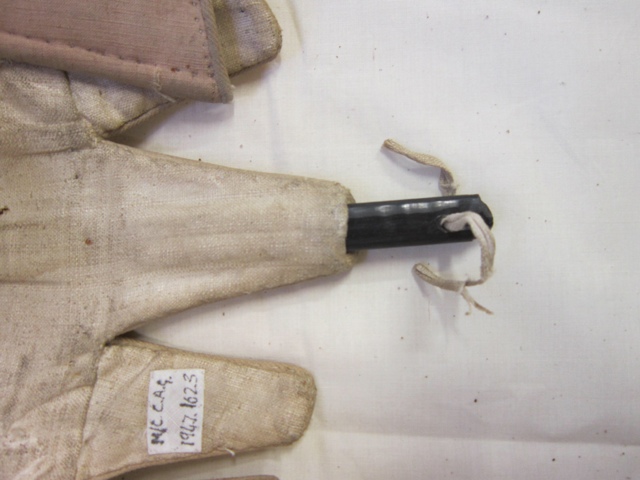 Two curious things had me scratching my head, though. First, both sets of stays had these wide twill tape straps applied from the base of the armscyes and stitched to the front of the armscyes about 3" or so. At the opposite end of the straps were 5-6 worked eyelets. The straps appeared to coordinate with the position of small loops stitched to the back of the stays, as though they were intended to pass through the loops and be secured somehow. 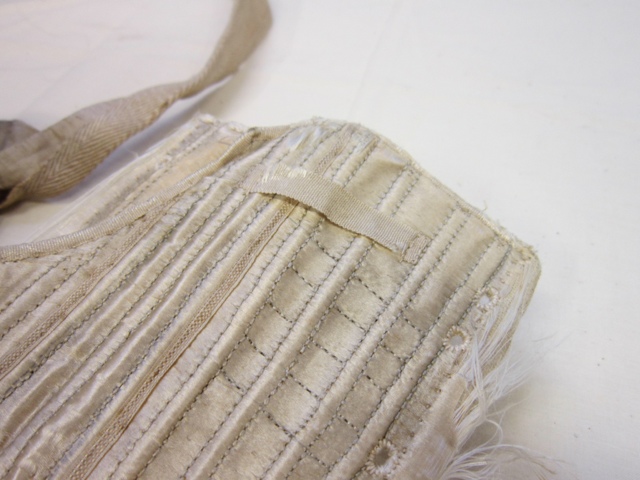 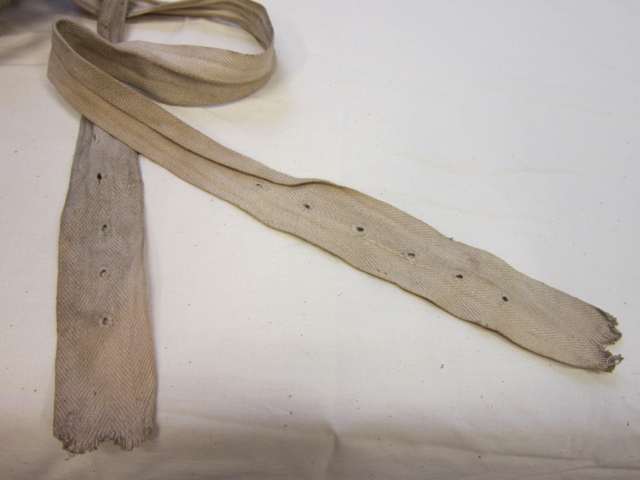 I thought at first that this must be some later alteration for mounting the stays on a mannequin, but the more I examined the straps, the more it looked like they were added as an element of functionality when being worn. Could it have been a DIY job of the woman who wore these originally, to help the stays stay in place while she wore them? There was no indication of built in straps having been removed... The stays looked as though both were intended to be strapless.

The other oddity was what appeared to be two rust spots in the exact same position on either side of the center front on the pink stays. 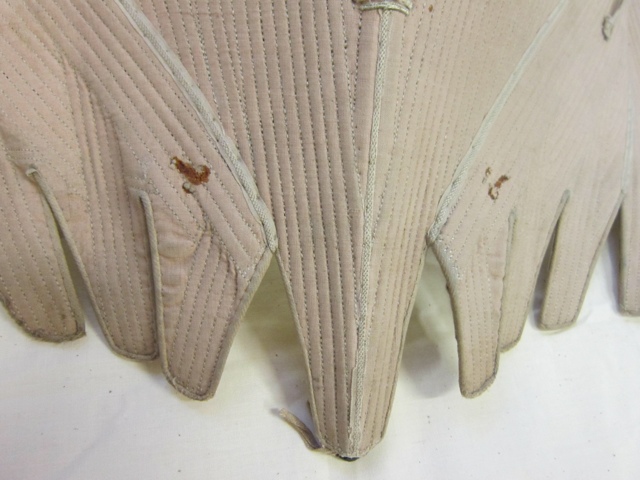 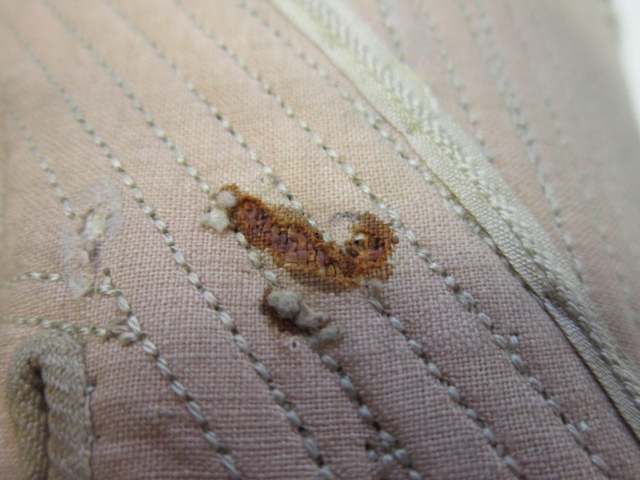 In all honesty, they looked to me like blood stains. I could find no indication of iron metal being used in this corset, but truly, it was hard to tell without taking apart the stays. On the left hand side of the stays, the stain looked as thought it was eating through the fabric from the outside in, and on the back of the stays, there were no corresponding stains to suggest that the anything had pierced the wearer's body. Perhaps the stains were left from some other thing, like iron hooks used to secure a pannier (a technique that was used in Victorian times, but which I have no evidence to support being used in the 1780s).

At any rate, these stays are good examples of they type of stay worn beneath the chemise gown. Not something we would consider "scanty" but when compared to earlier stays, they do appear a great deal less heavy duty.

And speaking of earlier stays, look what was on display in the 17th century gallery: 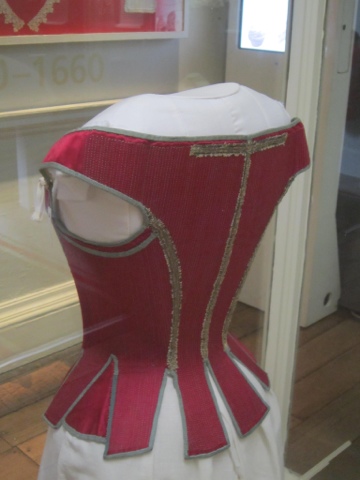 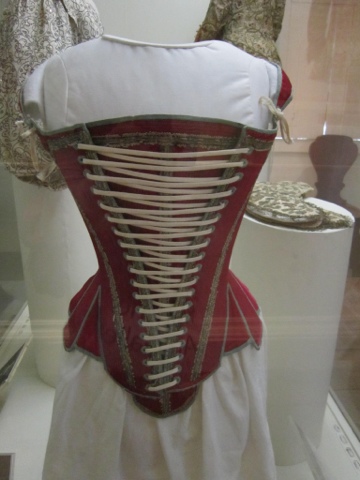 Posted by Sarah Lorraine - Mode Historique at 6:22 AM

Purchase from my Etsy store